Just down the road from Don Bradman’s hometown of Bowral, Berrima Diesel Service has been hitting big sixes in the 4WD turbocharging and diesel performance tuning game for a long time, so much so that they’ve become a must-visit for touring customers from all over the country.

We’ve been down here about 35 years and coincidentally this year is dad’s 60th anniversary tuning diesels,” says business owner Andrew Leimroth, whose oldest son is an apprentice with the business. “We’re third generation in the business of tuning diesels.”

Andrew’s dad, Reinhard – who trained as a Diesel Technician under Robert Bosch in Germany until he was sent to Australia in 1960 – started the small family business specialising in a unique niche. “We’re probably in between a calibration shop and the end user,” says Andrew, “A pump is a bit like a carby, after it’s been set up by the book, you’ve got to muck around with the mixture screw and all that stuff and pretty much that’s where we stand, between the repairs and that final tuning area.”

The small town of Berrima is situated in the quaint Southern Highlands, and one of the things that is unique about Berrima Diesel, is that most of their customers live nowhere near them.

“We get the odd local diesel car or 4WD in here,” says Andrew, “but most of our market is out of area and from the touring scene.

“We see Queensland or Western Australian numberplates here all the time – but we don’t get complacent about it either, because it means our customers have travelled a long way to see us. Maybe that’s also driven our quality control, because we don’t have the luxury of a second look. These people have got to keep going because they don’t have anywhere to stay tonight.”

Berrima’s market is predominantly the four-wheel-drive towing and touring market, and pre-winter is its busiest time.
“That’s the time for people to go out west or north,” says Andrew, “so we are absolutely flat out at the moment because they are all sort of passing through here heading to the warmer climate and many are thinking, ‘geez, I’ve been meaning to get to Berrima’.”

The workshop’s proximity to the historic township of Berrima is a plus. “Customers have actually got quite a historic village here that they can wander around all day, which is great.”

Inside, there are 10 to 12 staff on the go, including family. “Everybody’s pretty much involved in the business,” says Andrew.

Berrima Diesel Service has a small showroom, three service bays and a 4WD dyno that Andrew uses to back up what the company’s vast experience and road testing suggests.

“It shows us that what we’ve been doing for the last 30 years has been right,” says Andrew. “To tune non-turbo diesels on the road, you’ve got to be really good at road testing. I think I had an advantage in honing my skills there, and that’s an advantage my son might not have because of the technology he’s come up with. We always say that about all the wily old buggers, they’re better at picking up real world advantages because they didn’t have the luxury of all the equipment! Dad came to Australia at about 19 or 20. He was still a bit green but he was sent out to head the diesel and electrical section in Australia because he was that good.”

Andrew also has a ‘replica business’ – Berrima diesel Philippines, which has been going as a workshop for seven years. “We try to get back there about every two months and spent a week over there, so we’re always going between the two places on keeping tabs on everything.” 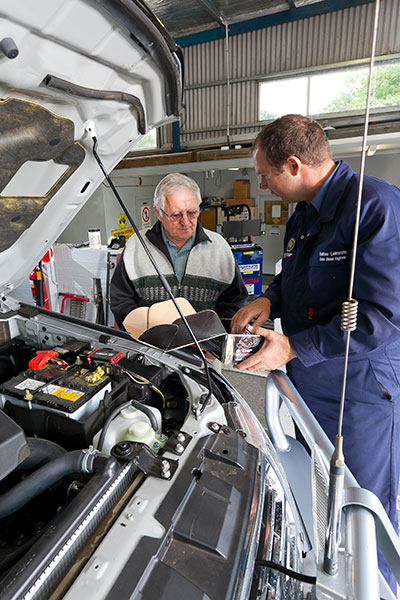 Andrew says the family business aspect has always remained a point of sharp focus at Berrima Diesel, and it’s a feature he credits with some of the trust his customers show towards them.

“I don’t know if there would be any other businesses in the auto diesel tuning scene that are three generations old. When customers come to us, it’s obviously because of a trust factor. We’ve been in the scene for so long and they want to talk to us. They don’t want to just leave their keys at reception.”

Berrima Diesel’s flagship products are its DP Chips and tuning modules, products they’ve developed over the years and retail through agents around the country. Performance tuning with chipping is an area that has continued to grow, and the DP Chips are also exported into Asia, Africa and India, but its unique market is Australia.

“We have this unique need here that combines touring, towing heavy loads and caravans and four-wheel-driving itself,” says Andrew. “We might drive fully loaded all the way from Sydney up to Cairns, and beyond, just to get to the starting point for the Cape York trip.

“People read forums and they’re all pretty savvy now. The first thing they want to know when they’re looking outside the square for a new chip is, is it safe? After that, they want performance and economy gains. But when they’re going into a remote area 400km from the nearest town, it must be safe.

“There are a lot of horror stories out there with chipping – I’ve seen the cycle of over-tuning for decades, when aftermarket turbo-ing was very popular. Motors were blowing up and all sorts of other things. It wasn’t really the turbo, it was the tune. The guy tuning it was overpowering. So I think this market is very aware of the safety factor and knows that you can get a power game, but it has to come from a reputable and reliable source.”

Asked what gets Andrew out of bed every morning to come back to work, he’s quick to answer: “I think smiling customers. The challenge of diagnostic work on diesels is exciting; you’re not just waking up and draining oil each day. It’s probably harder now than it’s ever been – electronics can really send you a wild goose chase because that sensor gets you thinking one way with the problem, but there are other mechanical factors, and if you don’t have the experience behind you, it’s easy to head off in the wrong direction.”