WHAT IS THE EXHAUST SMOKE FROM YOUR 4WD REALLY TELLING YOU?

If you’ve ever wondered what the smoke coming from your exhaust means, then you’re not alone! We’ve all seen it at one time or another. You’re pushing hard to get your 4WD up a steep, tricky section of track, only to look back and see plumes of smoke bellowing out from the exhaust. At best, it can be as innocent as choosing the wrong gear for a hill and causing the engine to labour more than it wants to. However, in the majority of situations that exhaust smoke is trying to tell you something. Knowing just what it means can give you a real insight to the condition of the engine and its fuel system and help you avoid long-term damage.

Diesels are typically known to chug a little exhaust smoke when you’re working them hard off-road. That said, more than a puff or two should begin to ring alarm bells. While there are a number of high-tech gadgets being added to modern diesel engines designed to reduce diesel smoke, like diesel particulate filters (DPFs), the cause for a smoky engine remains the same – old or new!

To give you every chance at diagnosing diesel smoke from your 4WD, we’re going to take an in-depth look a just what the various types of diesel smoke really mean. To cover all bases, we’ve called into to Berrima Diesel to catch up with Andrew Leimroth about the tell-tale signs you can look out for. Armed with this information, you’ll be in-tune with even the slightest amount of exhaust smoke from your 4WD, giving you a fighting chance at getting to the bottom of any problems as early as possible.

So just what do these diesel smoke signals really mean?

At the end of the day, any diesel smoke coming out of your exhaust is going to cost you money one way or another, especially if it’s left to its own demise. Even a simple fault like a blocked air filter will see a negative impact on the way your 4WD performs and can lead to its own colour of smoke out of the exhaust. To help put your finger on any costly problems, let’s take a look at the reasons behind various colours of exhaust smoke.

MOST COMMON CAUSE:
INCORRECT IGNITION TIMING

As a general rule, the first cause of a diesel that’s blowing white smoke will be related to the injector pump timing. Diesels rely heavily on high compression and correct injector pump timing to fire the combustion cycle. Any reduction in the cylinder pressures or fuel delivery will result in an incomplete combustion process. That white smoke you see from the exhaust is raw or completely unburnt fuel.

“Air entering the fuel line or blockages in the filter are common problems that lead to low injector pump pressures,” Andrew says. “A diesel that has the incorrect injector pump pressures can sound quieter than normal and tends to splutter as you try to rev the engine. Bad injector spray patterns have been known to cause white smoke too. This comes about when the engine attempts to burn through dribbling injector droplets when it’s not atomising the fuel correctly. Dribbling injectors tend to make the engine noisier than normal and also can contribute to black smoke problems.”

A drop in compression can also contribute to white smoke from the exhaust and can be from a number of different situations. A worn high-kilometre engine, weak compression rings, a blown head gasket or even the incorrect head gasket being used during a rebuild – they’ve all been known to cause a diesel to chug white smoke. Along with white smoke from the exhaust, the engine is likely to be down on power and difficult to start.

“Aside from the typical causes of white smoke, we’ve seen a number of customers who have been caught out when rebuilding their diesel engine. One particular customer came to us after having the 1HZ engine in his 80 Series ’Cruiser rebuilt, as it was now blowing white smoke,” Andrew says.

“After diagnosing it, it was found that the parts supplier the owner used neglected to inform him that there is more than one thickness head gasket available for his engine. Subsequently, a thicker gasket was supplied, creating the sensation of a low-compression engine. All the owner’s hard work of rebuilding it was undone.”

White smoke from the exhaust is notorious in older diesels with rotary injector pumps, as they’re adjusted to perform at specific pressures. Common-rail diesels will typically stop running if pump pressures are restricted as they operate between finer tolerances. In many cases, diagnosing white smoke from the exhaust should start with a thorough tune, with correct injector pump adjustment a high priority.

In many cases, tuning a diesel can be a bit of a black art without the right test equipment. There’s good reason why diesel experts invest big bucks into specialised gear and training to perfect their skills. Sure, we’ve all been tempted to fiddle with the settings on our engine in a bid to get more out of it, but the reality is we’re likely to be doing more harm than good.

Tuning a diesel is significantly different compared to petrol engines, and it’s often where most problems develop. “In some respects, the principles that work on a petrol engine are reversed when it comes to diesel engines. Lean air-fuel ratios equate to cooler engine temperatures, while rich air-fuel ratios will make the engine run destructively hot,” Andrew from Berrima Diesel explains.

“Any smoke coming out with an accurately measured AFR above 15 or 16 wouldn’t be smoke, it would more than likely be the usual raft of carbon stuck in and around all sorts of ports and the exhaust just getting burnt out, especially if it clears out after a good hard run,” Andrew says. “Without access to the correct test equipment, and experience, you’ll be simply guessing the AFR when adjusting the fuel settings on your injector pump.”

When you consider the long-term damage that can be done, it’s just not worth risking an engine rebuild for the sake of a proper diesel tune. Remember black exhaust smoke is taking money straight out of your wallet!

Common causes of black (or grey) smoke are incorrect injector pump settings, dribbling injectors or a blocked air intake system, just to name a few. The end result is an engine that’s over-fuelling.

MOST COMMON CAUSE:
BURNING OIL

There are a number of reasons why engines will blow blue smoke, but assuming the correct oil is used, the main culprit behind the problem is oil burning in the cylinders. It only takes a tiny amount of oil to produce blue smoke from the exhaust. Some engines have been known to continue running strong for thousands of kilometres even burning small amounts of oil. That said, once an engine develops an appetite for oil, often the only way to rectify the problem is to repair the failed internal components.

Oil has a habit of making its way into the cylinders by either passing directly into the combustion chamber or entering through the intake plumbing. An engine that’s breathing heavily or has a blocked air filter will use oil through the positive crankcase vent (PCV) tube. The PCV is the pipe running from the rocker cover to the intake plumbing. This is often referred to as blow-by, because it’s a result of compression making its way passed the piston rings in turn pressurising the sump. This forces oil to mist out of the PCV and be drawn into the engine. 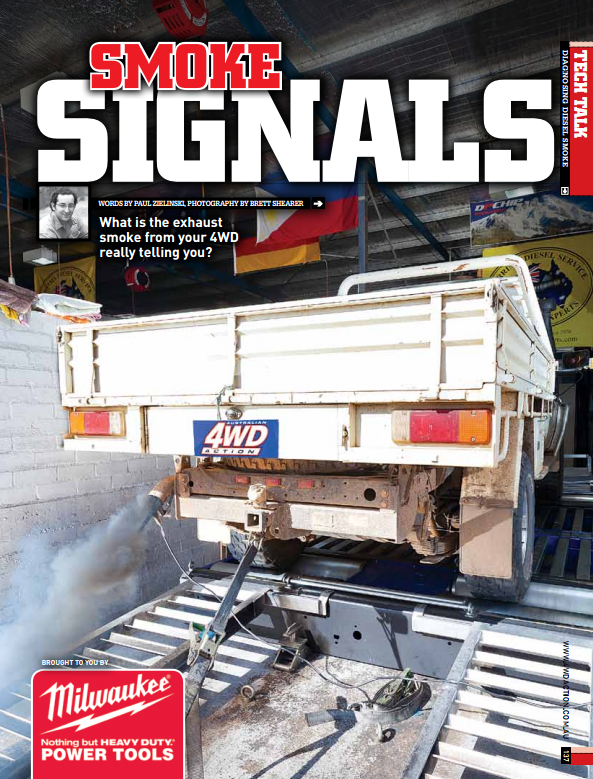 “An easy way to pick if an engine has excessive blow-by is to carefully open the oil filler cap while it’s running. If you feel excessive pressure escaping from the engine filler hole and the engine turns into a steam train, it’s likely to need a rebuild very shortly,” explained Andrew. An engine can also blow blue smoke as a result of oil leaking past the oil control rings on the pistons or by leaking down the valve stem seals into the cylinders.

Always monitor your engine oil consumption between services, as an engine with good compression can still use oil but not blow visible blue smoke. “Blue smoke is a hard one to spot as diesel fuel is essentially a form of oil. The thing is, good compression will allow the engine to burn oil cleanly in small volumes and go unnoticed out of the exhaust pipe,” Andrew says. It’s an easy trap to fall into with high-compression diesel engines.

When is it chugging?

By pinpointing the exact time your 4WD decides to send those smoke signals, you’ll be able to put your finger on exactly why your engine is breathing heavily. Is it blowing smoke down low in the rev range, under load or when your engine braking down steep hills, only when the engine is cold? Each of these scenarios, and a heap more, will all be clues to getting to the bottom of the problem. So what do these tell-tale signs really mean?

When the engine blows smoke at start-up, it’s often an indication of early signs of wear and tear. In a cold engine, internal parts are reluctant to do their job efficiently and can expose any underlying issues like worn bores or sticking piston rings. It isn’t until the engine has reached its operating temperature that oil stops bypassing critical parts.

Blowing smoke under load is a typical sign of worn compression rings, especially when the smoke is blue. Dark-coloured smoke under load is an indication of a fuel-related problem and can be caused by incorrect injector pump setting. If you spot exhaust smoke just after you’ve been descending down a long steep hill, typically when engine braking, it’s a strong sign of worn valve stem seals.

At the end of the day, most diesel 4WDs tend to puff a small amount of smoke from time to time. Don’t be too alarmed when you first spot traces of smoke, as it doesn’t always mean your engine is destined for a rebuild. On the same token, catching problems early will always save you money in the long run, so it’s worth getting a smoky engine check by a diesel expert!

Knowing exactly why your 4WD is blowing smoke will be the key to diagnosing problems before they develop into something more sinister. The last thing you want is to end up being towed home because of a problem you could have fixed before your trip away. Getting to know your 4WD, how much fuel it typically uses, and monitoring any oil consumption closely, will determine just how deep into your pockets you’ll have to dip when things turn pear-shaped.