4WD TV'S SIMON AND MIRANDA CHRISTIE LIVE LIFE TO THE FULL - AND THEIR WORKLIFE RIGS ARE A TRUE REFLECTION OF THAT.

It’s an overnight success that has been more than 10 years in the making. Simon Christie and his wife Miranda’s 4wd TV has garnered the type of viewer praise and commercial success that other free-to-air Aussie motoring TV shows can only dream of.

4wd TV began screening in 2004 and covers all aspects of 4X4ing, including off-road competition and touring. Now, with 4wd TV in its 10th year of 40 annual episodes, the team’s other productions — YOUR4X4 and Simon Christie’s 4wd Pro Tips — are well positioned alongside it in te Christie production stable, in terms of ever-growing critical and commercial success.

YOUR4X4 is screening its eighth series this year, and 4wd Pro Tips, screening 50 episodes last yeal; is now into its second year of production. All three shows are broadcast on community and satellite television nationally, and SKY New Zealand broadcasts 4wd TV for those across the pond. Since its inception in 2004, Simon and Miranda’s TV production has featured a massive variety of 4X4 rigs and Simon himself owns a couple of wild modified vehicles, including a 5.7-litre V8-powcred 1978 FJ40 LandCruiser.

The couple’s background is not what immediately springs to mind for a 4X4-dedicated television show. Simon has a degree in Biophysics and Miranda in Criminology and, before they became a production powerhouse, the couple spent six months of the year running their company National Institute of Education, which prepares prospective medical students for the requisite university entry exam and interview.

This work gave Simon and Miranda six months of the year off — and plenty of urne to indulge in their interest for off-road touring. Soon Simon began competing in off-road events. Then, with sponsors keen for valuable input on their products, he began what became a strong, long-lasting association with off-road accessory companies in helping with their research and development. 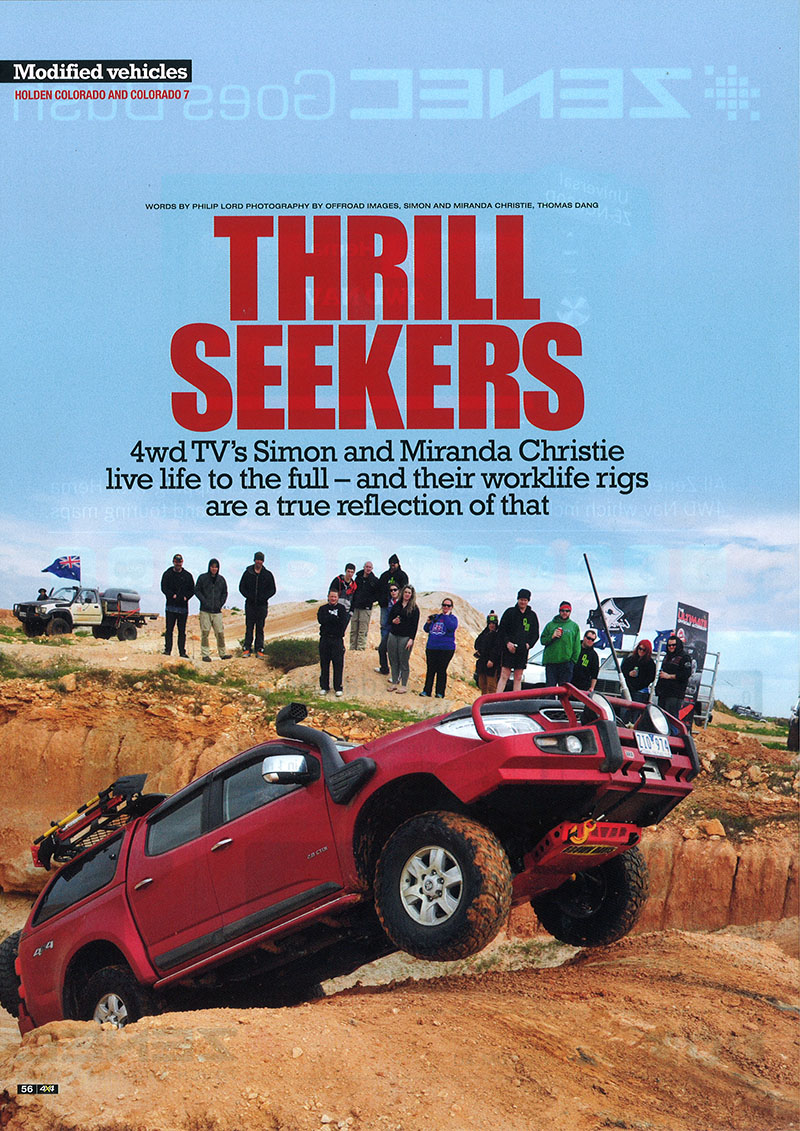 Simon and Miranda saw a need for television coverage of 4X4 sport and touring, and so the idea of producing a four-wheel drive television formed.

Given his background — more than 20 years as a 4X4 enthusiast and the last 10 years immersed in day-to-day production of a TV show that covers everything to do with four-wheel driving — it was going to be interesting to see what modified vehicle Simon would come up with.

Not one, but two vehicles have arrived this year for Simon to develop: thanks to Holden’s endorsement of the series, a Holden Colorado 7 has been supplied as the official vehicle sponsor of the three shows. Ilolden also supplied a Colorado ute for use in the shows.

Simon quickly got to work to make the two stock-standard, new vehicles the most capable off-road tourers he could. Both vehicles would need to be competent off-roaders to get the 4wd TV crew to the gnarly spots in which they film.

Simon said Holden had been very supportive of the improvements made to the vehicles.

“Holden is embracing the accessories part of it.” In fact, at time of writing, Simon was planning to take the wagon to an off-road testing ground to show Holden senior management what the vehicles, with all their trick gear, were capable of compared to standard versions,

Simon believed that, while Holden execs would be familiar with the concept of modified bidons — such as HSV modified Commodores, the 4WD element would be very new to them.

“This will be a platform for us to show that this is an HSV version of a 4X4.”

The Colorado 7 LTZ has already been fitted with an ARB Deluxe bulibar, Narva Ultima 225 50w 1111) driving lights, a Safari snorkel and ARB Airlockers front and rear. The vehicle is also a test-bed for ARB to work on producing an OME suspension kit for the Colorado 7 series.

Like many off-roaders with larger tyres and with extra weight of accessories fitted, better performance has become a priority. A High Performance Diesel (HPD) GOOmmx300mm alloy air-to-air intercooler has been fitted, which Simon reckoned is about twice the surface area of the standard intercooler it replaced. The new intercooler is designed to deliver cooler air to the combustion chamber and thus improve performance. Not content to leave it there, Simon has arranged for the Colorado to be fitted with a 3-inch Berrima Diesel free-flowing exhaust system.

When 4X4 Australia caught up with Simon and the 4wd TV crew, he was at Berrima Diesel having a DPChip installed. The DPChip (combined with the larger intercooler and 3-inch exhaust system) yielded a hefty power increase: on the dyno at Berrima Diesel the power went from an 115kW peak (at the rear wheels) when standard, to 145kW with the mods and tune completed.

Not yet fitted but on Simon’s to-do list for the Colorado 7 are, among others, a Kaymar rear-step bar and a Brown-Davis long-range fuel tank.

The show’s Colorado dual-cab ute was with the Colorado 7 at Berrima Diesel. Simon has been able to complete more moth on the ute, given it has been on the market longer and there are more off-the-shelf accessories available.

Like the wagon, the ute has an ARB Deluxe combination builbar, which houses the Lightforce Genesis HID driving light, RFI UhF aerial with fibreglass spring base and the Mean Mother Edge Series 95001b electric winch with synthetic rope.

The wagon and ute are LTZ specification, but instead of the 18-inch alloys fitted as standard (17-inch on the LTZ tite), they have the Colorado LT ure’s 16-inch alloys fitted. The reason, as Simon explained, was simple: just to aLlow a better choice of off-road rubber.

Under the bonnet the 2.8-litre Duromax has received the same treatment as the wagon — an HPD intercoolem; Berrima Diesel 3-inch exhaust and a DPChip. Further to that is an JIPD catch can, made of CNC bifiet aluminium and with a neat oil separator. The catch can has an oil-level dipstick so you can check to see when the oil needs to be drained.

The Colorado ute has ARB diff lockers front and rear plus Brown-Davis underbody protection plates. ARB side rails have been fitted to protect the sills from off-road damage.

Inside the vehicle the ARR twin-motor air compressor is under the front passenger seat, while the dash houses the ARR reversing-camera screen, Oricom 80-channel UhF radio and display unit for the Inawise Vyre Pressure Monitoring System (TPMS). This TPMS is wireless; sensors are integral to the tvre valves. ‘I’he sensors each house a transmitter that fotivards vital pressure information to the on-dash display unit, A Scangauge provides real-time read.outs of the vehicle’s sensors.

The Colorado’s standard 76-litre fuel tank has been replaced with a Brown-Davis 128.litre tank, and this is augmented by an auxiliary 100-litre tank. The auxiliary tank pumps fuel into the main tank as required.

Also at the rear is a steel colour-matched Carryboy canopy, which houses the slide fitted within the tub. The Bedsilde 2000 Pro ltD takes away the hassle of reaching into the tub area for gear, and is rated to carry 750kg at full extension and 1000kg at half extension. The slide has a rubberised skin deck, 15mm removable sides and four tie-down points.

At the tail of the vehicle sits a Kaymar rear-step bar and an ARB reversing camera.

Simon and Miranda need vehicles capable as any competent off-road tourer to get to the places they film, but they also need a way of keeping their camera gear charged and ready to go. For this reason Projecta IP 600 watt inverters have been installed, and Piranha is setting up charging stations in the rear of the vehicles so that the inverters can be hard-wired in.

According to Simon the vehicles won’t be used constantly but he still expects they will each easily clock-up 30,000. 40,000km in their first year with the shows. Once the wagon’s ARB suspension is installed and wheels shod with appropriate off-road rubber, the first off-road tour for the wagon will be an expedition to Sunset Country in the south-western NSW desert region for a travel story.

There aren’t two better-prepared 4X4s for that trip.